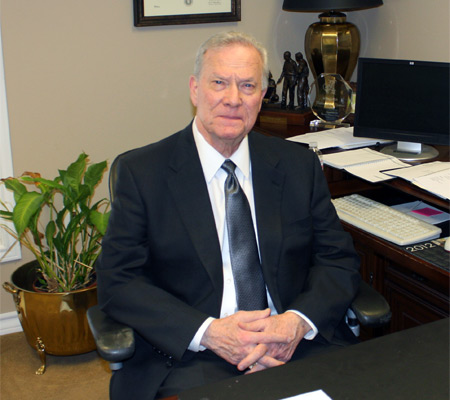 While attending Baylor School of Law, Mike took a leave of absence to serve in the U.S. Army during the Vietnam conflict. After returning and completing law school, he began his career in 1972 as a prosecutor in the office of legendary Dallas County District Attorney, Henry Wade.  Mike later served as the Criminal District Attorney of Upshur County, Texas.  Now, with over 40 years of trial experience, he has been involved in civil litigation throughout Texas as well as Arkansas, Louisiana, Oklahoma and California. Mike's practice has focused on litigation in federal court in the Eastern District of Texas in the Texarkana, Marshall, Tyler and Beaumont Divisions, as well as the Western District of Arkansas.  His extensive trial experience in the state and federal courts of east Texas gives Mike a special knowledge of the practices unique to these courts.

Due to Mike's leadership, skill and high ethical standards he has been bestowed an AV Preeminent® rating by Martindale-Hubbell®.  This peer review rating is an objective indicator of a lawyer's high ethical standards and professional ability.  The rating is generated from evaluations of lawyers by other members of the bar and the judiciary, and it stands as a testament to the fact Mike's peers rank him at the highest level of professional excellence.  His extensive trial experience has also led to Mike's induction into the American Board of Trial Advocates (ABOTA),  an invitation only organization for trial attorneys.  ABOTA membership is reserved for those who meet the stringent qualifications for membership and possess high personal character and honorable reputation.